Jewish Identity in an Anglo-Jewish Community: The Findings of the 1978 Redbridge Jewish Survey

Redbridge Jews are typical of Anglo-Jewry. The third or fourth most numerous Jewish population in a Greater London borough they live in the corridor located between the North Circular Road and London Green Belt, where the most populous and growing Jewish populations are to be found. Jewish Identity in an Anglo-Jewish Community is the fourth report in a series based on an extensive survey of this population.

The Redbridge Jewish Survey was a co-operative venture and was supported by a variety of agencies and organisations working in the Jewish community. The survey itself aimed to provide information to assist them in the planning and administration of Jewish affairs and social services at the local community level. Many questions were specifically commissioned by organisations for their own particular purposes. As far as possible an attempt has been made to integrate the answers into an overall assessment of Jewish identity. These include some on topics such as the Jewish Day School, vocational education, aliyah, tourism and philanthropy to Israel.

The Work and Employment of Suburban Jews: The Socio-Economic Findings of the 1978 Redbridge Jewish Survey (Series)

Kosmin, Barry A., Levy, Caren Jewish Identity in an Anglo-Jewish Community: The Findings of the 1978 Redbridge Jewish Survey. Board of Deputies of British Jews. 1983:  https://archive.jpr.org.uk/object-uk280
Result from 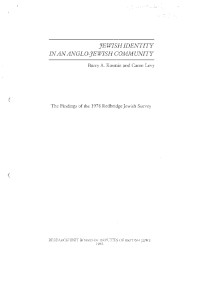