Jews in the United Kingdom in 2013: Preliminary findings from the National Jewish Community Survey

JPR’s preliminary findings report from the 2013 National Jewish Community Survey reveals a community in which younger Jews are more religious than older Jews, the traditional middle-ground is shrinking, and people are more likely to be moving away from religiosity than towards it.

It goes on to demonstrate that whereas 40% of respondents describe their Jewish upbringing as ‘traditional’ – the common placeholder for centrist, or middle-of-the-road mainstream Orthodox Judaism in the UK – just 26% describe their current position in that way.

And it provides data on denominational switching over the course of people’s lives, allowing us to measure the extent and direction of this type of movement over time.

The report also includes evidence indicating that the prevalence of intermarriage is slowing down, a phenomenon that has also been found in recent data on Jewish Americans.

Additional new data in the areas of Jewish education, charitable giving and health, care and welfare are also included in the report.

Charitable giving among Britain's Jews: Looking to the future (Series) 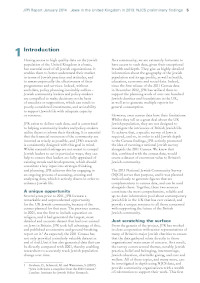