The attachment of British Jews to Israel

The findings in this report are based on a 1995 postal survey of a sample of 2,194 British Jews.

Overall it was found that 43 per cent of the sample felt a strong attachment to Israel, 38 per cent were moderately attached, 16 per cent expressed no special attachment, while 3 per cent had negative feelings towards Israel.

The findings point to the significance of experiencing Israel for younger people. The young have a psychological and emotional deficit that has to be compensated for by visiting Israel. 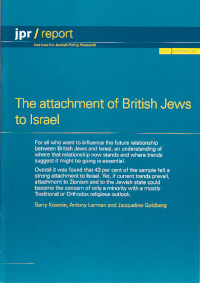