Since 1989 mass emigration has played a leading role in the rapid
demographic decline of the Jews in all countries of the former Soviet Union (FSU).
This migration and the demographic decline of Russia's Jewry have a specific
character.
Comparing the Jewish population decline in the Russian Federation with the
much faster drop in other FSU countries will allow us to study the process of
concentration of remaining FSU Jews in Russia. We shall analyze the dynamics of
Jewish emigration from Russia as well as its directions. The place of Russia's Jews in
the redistribution of those Jews who have remained in the FSU will be indicated by
their migratory balance. Demographic selectivity of the recent Jewish mass emigration
from the Russian Federation and its consequences for the Jews remaining there will be
examined. Finally, the most recent dramatic increase of Jewish emigration after
Russia's financial crash of August 1998 will be depicted

Link to article including link to pdf, Russian Jewish Migration in the Post-Soviet Era 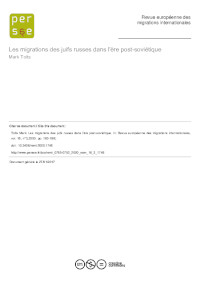