'Remember, Reflect, Reimagine': Jews and Irish nationalism through the lens of the 1916 centenary commemorations

This paper examines popular representations of Jewish attitudes towards Irish nationalism, and the way that these have evolved in the hundred years between the Easter Rising of 1916 and its centenary commemorations in 2016. Although it is now a standard assumption that Jews supported the Irish nationalist movement, including its militant branch, sources from the first half of the twentieth century suggest that the reality was in fact significantly more nuanced and ambivalent. The fiftieth anniversary of the Easter Rising appears to have marked a turning point for constructions of both Irish and Irish Jewish identity. In 1966, the Irish government viewed the first state-sponsored commemoration of 1916 as an opportunity to foster more unifying and inclusive constructions of “Irishness” with the Easter Rising as a focal point. Around this time, a more positive narrative of Jewish engagement with Irish nationalism also appears to have emerged. In the ensuing fifty years this narrative has been gradually buttressed, expanded upon and embellished, particularly in the run-up to the much anticipated centenary commemorations of 2016. In this article I investigate how the narrative of Jews and Irish nationalism has evolved, and continues to evolve, in response to changing needs and circumstances both within and beyond Ireland’s Jewish community. 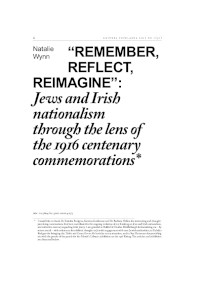