Jews were only occasional visitors in Iceland from the 17th century onward. Until the 1930s, the Holy Scripture as well as the most recent European trends in anti-Semitism constituted nearly the only knowledge the Icelanders had about the Jews. Jews in the flesh materialized as Jewish refugees from Nazi Germany in the 1930s. Most of the refugees moved on to other countries, and some were even expelled or deported. In the postwar period, Jews living in Iceland remained an isolated group. They quickly realized that most Icelanders showed no concern about the sufferings some of them had undergone during WW II. Members of the prewar Icelandic Nazi Party became high-ranking officials, war criminals found safe haven in Iceland, and an odd, social-democratic politician even engaged in publishing an anti-Semitic journal along with the Protocols of the Elders of Zion in Icelandic. Possibly because of anti-Semitic sentiments, some Jews in Iceland tried to conceal their Jewish background altogether. At present, the small Icelandic Jewish community keeps a low profile amid rising anti-Semitism centered on the Middle East. 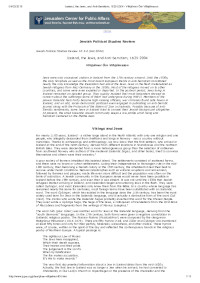