Perceptions of antisemitism among Hungarian Jews

In association with the United States Holocaust Memorial Museum

[From the introduction to the article]
Between March and November 1999, under the auspices of the Minority Research Institute of the Department of Sociology, Eötvös Loránd University, I conducted a sociological survey of the current situation of the Jewish community in Hungary. In the course of the survey, 2015 respondents were interviewed. The most important demographic and social data were collected for four generations – from respondents’ grandparents to their children. Participants in the survey were asked to respond to questions concerning their relationship towards Jewish traditions and their acceptance or rejection of various forms of Jewish identity. They were also asked for their opinions on assimilation, integration and dissimilation, on Israel, and on the current significance of the Holocaust. Finally, an attempt was made to gauge the opinions of Hungarian Jews on the state of their own community, on their relationships with non-Jews, and on antisemitism in postcommunist Hungary.
My purpose in this article shall be to analyse the data that we collected in this latter area. Firstly, I shall reveal how Jews living in Hungary define antisemitism, and whether – when it comes to classifying particular statements as antisemitic – there are any significant differences between younger and older groups of Jews, between those who are better educated and those with less education, and between those with a stronger and those with a weaker sense of Jewish identity. I shall then explore how the various respondent groups judge the extent, intensity and gravity of anti-Jewish sentiment in the country, examining in particular whether respondents themselves have experienced such sentiment or have been subjected to discrimination. I shall reveal whether respondents think that antisemitism will increase or decrease in the coming years. Finally, I shall touch upon the policies that respondents consider desirable when it comes to tackling antisemitic phenomena. Evidently, the images formed by Jews and non-Jews shall determine in large part the relations between the two groups of one other.

Pre-publication draft courtesy of the author 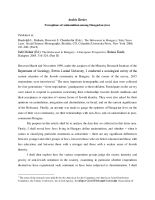