Journal for the Study of Antisemitism

The article analyzes the newest survey results on antisemitic prejudices, antisemitic political discourses, and political antisemitism in present-day Hungary. According to the research findings, during the first decade and a half after the fall of communism, 10%-15% of the Hungarian adult population held a strong antisemitic prejudice. Surveys conducted after 2006 show not only an increase in the absolute percentage of antisemites, but also an increase in the proportion of antisemites who embed their antisemitism in the political context. This phenomenon is linked with the appearance on the political scene of Jobbik, a more or less openly antisemitic party. When examining the causes of antisemitism, the most interesting finding was that the strength of antisemitic feelings is regionally different and that these differences correlate with the strength of Jobbik’s support in the various regions. Accordingly, we hypothesized that support for a far-right party is not a consequence of antisemitism, but conversely should be regarded as a factor that mobilizes attitudes leading to antisemitism. Thus, antisemitism is—at least in large part—a consequence of an attraction to the far right rather than an explanation for it. While analyzing antisemitic discourse, we found that the primary function of the discourse is not to formulate anti-Jewish political demands but
to establish a common identity for groups that, for various reasons and motives, have turned against the liberal parliamentary system that replaced communism.

Kovács, András Antisemitic Prejudice and Political Antisemitism in Present-Day Hungary. Journal for the Study of Antisemitism. 2012: 443-467.  https://archive.jpr.org.uk/object-519
Result from 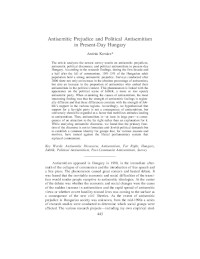