Vidal Sassoon International Center for the Study of Antisemitism, The Hebrew University of Jerusalem

The paper first describes the Jewish community in the Federal Republic of Yugoslavia, which consists of the two federal units of Serbia and Montenegro. There is no Jewish community in Montenegro; only a few Jews have ever lived there. In Serbia there are only 3,500 Jews in nine local communities affiliated with the Federation of Jewish Communities of Yugoslavia. Jewish identity is a voluntary ethnic self-identification; some members of these communities are not of Jewish origin, but have integrated into the community through their marriage ties.

The paper then focuses on the heritage of antisemitism in Serbia. After 1945, i.e., from the time Communists came into power until the final disintegration of the Yugoslav state, one may distinguish three stages: 1945–1967, a period characterized by no public display of antisemitism; 1967–1988, in which antisemitism disguised as anti-Zionism; and 1988–1991, which saw the process of "republicanization" and functionalization of Jews. The paper describes the re-emergence of traditional antisemitism in Serbia since 1991, and the misuse of Jews for the Serbian nationalistic agenda as part of the post-communist development in the Federal Republic of Yugoslavia.

It can be concluded that antisemitism in post-communist Yugoslavia, although peripheral, is a constant phenomenon.

Analysis of Current Trends in Antisemitism

Sekelj, Laslo Antisemitism and Jewish Identity in Serbia After the 1991 Collapse of the Yugoslav State. Vidal Sassoon International Center for the Study of Antisemitism, The Hebrew University of Jerusalem. 1997:  https://archive.jpr.org.uk/object-ser1
Result from 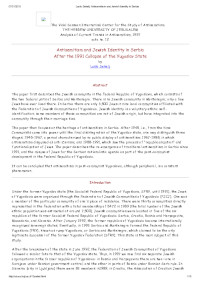