Anti-Semitism and Islamophobia: A Comparison of Imposed Group Identities

Do similarities exist among stereotypical portrayals of minority groups, regardless of social and historical context? Can some of the linguistic mechanisms that underlay the stereotypical portrayals of ‘the collective Jew’ at the beginning of the 20th century be found in the stereotyping of ‘the Muslim’ at the beginning of 21st? Is it at all relevant to see antiSemitism in line with other forms of intolerance, discrimination and racism? These questions make up part of a comparative analysis of anti-Semitic texts from the beginning of the 20th century and anti-Islamic debates going on in Norway today. While this article argues against a fundamental analogy between anti-Semitism and Islamophobia, and against an analogy between the structural position of Jews in the nineteen century and Muslims today, it argues for the relevance of a comparative semantic analysis of negative stereotypes of “the Muslims” and “the Jews”. 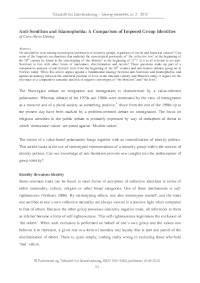