Demographically, post-Soviet Jewry has seen an overall decline resulting from assimilation, intermarriage, low fertility, high mortality, and emigration of younger age cohorts. Some  demographers believe that less than 500,000 Jews remain in the post-Soviet states. An intermarriage rate that some view as exceeding 80 percent creates complex situations for those Jewish groups that prefer to confine their programs to halachically Jewish individuals.

Jewish identity among Jews in Russia and Ukraine is most likely to be expressed as a sense of Jewish heritage, in particular, a common cultural or intellectual heritage, rather than a sense of common spirituality or sharply focused religious practice. Post-Soviet Jews also tend to believe that Jews should be familiar with modern Israel, but not necessarily feel obligated to live in Israel.

Gidwitz, Betsy Post-Soviet Jewry on the Cusp of Its Third Decade - Part 1. Jerusalem Center for Public Affairs. 2011:  https://archive.jpr.org.uk/object-fsu60
Result from 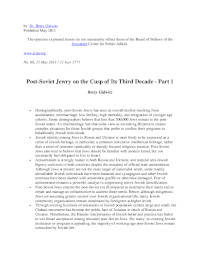