Antisemitism in Norway? The attitudes of the Norwegian population towards Jews and other minorities

This report presents the results of a survey of Norwegian
attitudes toward Jews and other minorities, undertaken
by the Center for Studies of the Holocaust and Religious
Minorities. Data were collected in November 2011 by
TNS Gallup. 1522 respondents participated.
The results confirm that stereotypical notions of
Jews do exist in Norwegian society. Overall, 12.5 per
cent of the population can be considered significantly
prejudiced against Jews. Thus, in a European context,
the prevalence of antisemitic notions in Norway is
limited and on a par with Great Britain, the Netherlands,
Denmark and Sweden. Certain antisemitic notions are,
however, more widespread in the Norwegian populace.
19 per cent of respondents agree with the assertion
that «World Jewry works behind the scenes to promote
Jewish interests», and 26 per cent believe that «Jews
consider themselves to be better than other people».
Antisemitism can also be measured by negative
feelings and social distance. The survey reveals that
9.7 of respondents feel antipathy toward Jews, while 8
per cent do not want Jews among their neighbours or
circle of friends. Taken as a whole, the three dimensions
that were utilized to measure negative attitudes toward
Jews are somewhat less prevalent among women,
young people and those with higher education than
among men, older people and those without higher
education.

Antisemitism in Norway? The attitudes of the Norwegian population towards Jews and other minorities 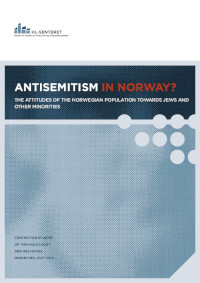