“Once in a while kosher, once in a while Shabbat” A Study on the Identities, Perceptions, and Practices of Children of Mixed Marriages in Germany

Whereas there is already quite a significant bibliography focusing on the experiences of intermarried couples in Europe, less attention has been paid to their children. This study, along with parallel studies in France and the Netherlands, suggest that the road to "assimilation" is not as linear and inevitable as it was thought to be; that the children of mixed couples never quite disconnect from Judaism, much on the contrary, Judaism is widely recognized to be an element of their identity. A second important finding is the capital role that the families and the Jewish institutions play in the formation of a positive Jewish identity among the children of intermarriage. Those who grow up in a Jewish household or who have been affiliated with Jewish institutions tend to develop stronger Jewish identities. Last but not least, far from being a "passive" population, most of the interviewees that want to be connected to Judaism show a very active attitude towards the search for a suitable Jewish environment, one that can assure them both legitimacy and acceptance.

For the purpose of this study, 45 individuals from various cities and towns in Germany were interviewed. 26 of the interviewees had Jewish forebears on their mother's side and 19 on their father's side. 23 had migrated out of which 21 came from the former Soviet Union. Among participants born in Germany, German history represents a unique context for mixed Christian-German/Jewish-German couples. On one hand, many participants found it difficult to reconcile what they perceive as conflicting German and Jewish narratives, often leading to conflicts of loyalty. Moreover, some relate to experiences of antisemitism coming from within their extended families. Also, German as a language contains words heavily loaded with Nazi significance. On the other side, the non-Jewish German parents of the interviewees are generally described as sensitive, making real efforts to support the Jewish parents by celebrating Jewish holidays, visiting Israel, learning Hebrew, playing a part in the community, and demonstrating initiative, for instance, by organizing trips to Israel or Jewish events, or reading books about the conflict in the Middle East.

Bernstein, Julia “Once in a while kosher, once in a while Shabbat” A Study on the Identities, Perceptions, and Practices of Children of Mixed Marriages in Germany. JDC International Centre for Community Development. June 2014:  https://archive.jpr.org.uk/object-ger13
Result from 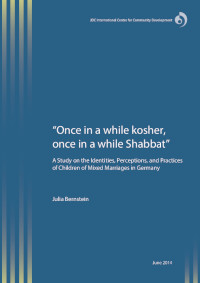